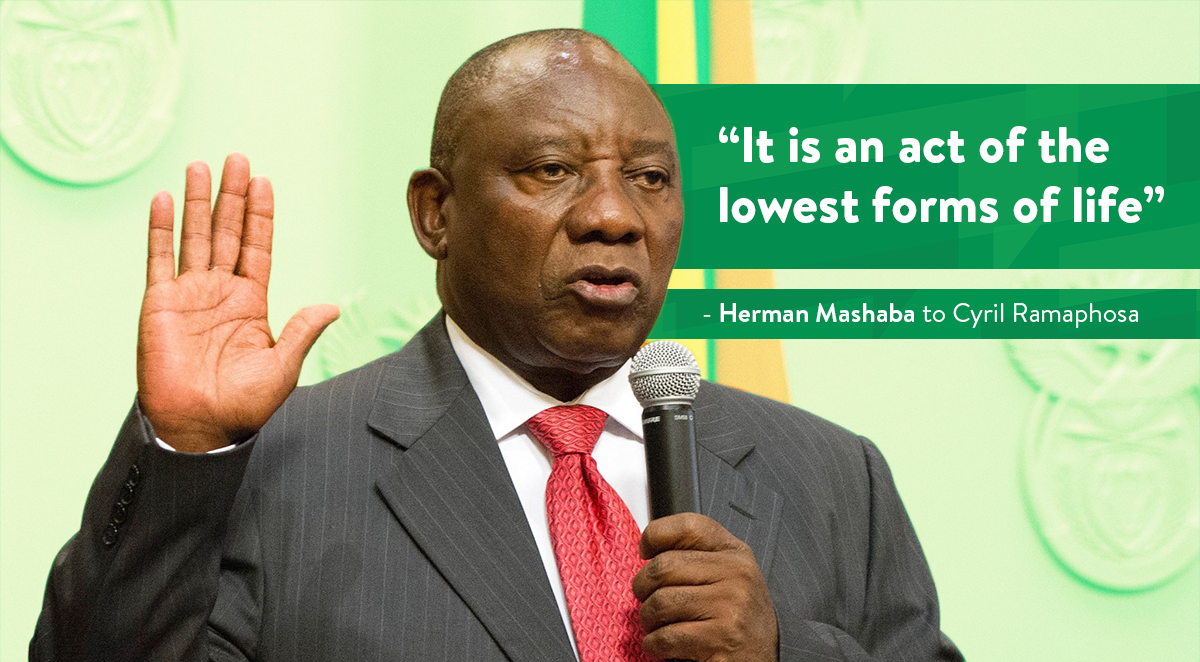 You were elected on the promise of renewal; ‘a new dawn’ I believe you called it.

I find myself writing to you, once again, out of sheer frustration over your catastrophic failure to tackle fraud, corruption and wrong-doing in government.

I watched your address on Thursday night. You described your feelings on the level of looting of COVID-19 relief funds and measures as ‘concerning.’

This is not ‘concerning’, Mr President. Concerning is how we feel about getting older every day. It is how cold it is in the mornings, or the lack of sleep we get at night. These issues are concerning. The looting of public funds intended to provide relief to people in the COVID-19 crisis, is despicable. It is an act of the lowest forms of life, and it is criminal.

I know a thing or two about tackling corruption. In my 3 years as Mayor of Johannesburg, I established a world-class anti-corruption unit with many of the people who were side-lined from the Scorpions, NPA and Hawks for doing their job a little too effectively. This unit relentlessly pursued corruption, investigated over 6000 cases worth R35 billion and affected over 800 arrests. It exposed cases against Ministers that still sit in your cabinet. I can’t even tell you how many officials were fired for corruption; it was simply too frequent an occurrence to document. One of the reasons this unit was effective was because they knew, unequivocally, that they would never be blocked politically. They acted without fear or favour.

Language matters, Mr President. I know this, because the corruption unit I established drew the clarity of their mandate from my leadership. I declared corruption public enemy number one. I described the people who looted as snakes, and I spoke frequently of the need to hunt them down. When you say corruption is ‘concerning,’ it is a cue to your law enforcement agencies, the country, and the looters that you don’t take the issue too seriously.

Now, it would be easy to say that perhaps it was just the wrong word written into a speech on Thursday night. That would be an acceptable explanation if it came from anyone else, but it comes from you; a President who presides over an organisation that could be said to more closely resemble one of the greatest criminal syndicates in the world than a political party.

I know you said that you have signed proclamations for the SIU to begin investigating these cases, but Mr President who are we kidding?

The investigators in the SIU, like the rest of the country, are well aware of the complete absence of a single high-profile prosecution of anyone in your tenure as President. They are aware, as are all South Africans, that while you are ‘concerned’ about corruption, the husband of your spokesperson scored a R125 million tender in Gauteng as a part of the COVID-19 response. Should the SIU look into this?

It is statistically more likely for a young person to become a drug addict than it is for a corrupt official in your government to face any form of consequence. Between the Hawks, SAPS, SIU and NPA, a case has not even been brought to our courts as a symbolic warning that those who continue to loot should even slow down.

This is why I take offense at your words on Thursday night, because they form part of an ongoing pattern of complete indifference to the level of fraud and corruption in South Africa.

I wont even go back to remind you of the spectacular cases of fraud and corruption that has been allowed to mushroom in our country. I won’t spend much time pointing out that global corruption indices regard your government to be more corrupt than former President Zuma’s. I wont even remind you that you, yourself, have quantified the loss of public money to corruption in the amount of R1 trillion.

What I will focus your attention on is our newfound dependency on international institutions for funding since your government has managed our economy into the ground. South Africa now has to go, cap in hand, to these institutions and borrow money to fund our spectacular budget deficit. Are you under the impression that these institutions are not aware of the level of corruption you preside over? Do you think your message on Thursday night offered any assurance to international lenders who now see the South African government as the skunk of the world.

In your address you correctly conveyed an understanding that corruption now, more than ever, poses a threat to life in South Africa as COVID-19 relief measures are pillaged. While I would like to find comfort in this, the truth is that it makes it worse. Money is being looted before the measures you packaged as a ‘stimulus package’ were even accessible by the people it was intended for. UIF applications, food parcels and other measures are being stolen while your government cannot even get these measures of relief out to South Africans. You know that lives are at stake, our economy and our access to finances, and yet the best you could muster is ‘concerning.’

Perhaps it is time for some hard truths Mr President, so here it comes:

You raised hopes for change in South Africa and you have crushed this hope with your choice of party before country. This is the nub of the issue, because any serious approach against looting would require country to come before party, and you do not possess the spine to make such a decision.